Home / Our Blog / What Framework to Choose: Vue, React, or Angular? Let’s Figure it Out

When starting to work with JavaScript, the question of choosing a framework immediately arises, and in fact, this is where the whole essence of the language lies.

JS – aka JavaScript – is one of the most popular programming languages ​​and there are a lot of options for front-end frameworks for it, but three are especially popular: Vue, Angular and React. There are a lot of materials on this topic on the net, but we’ll try to figure out which is best based on the experience of our developers.

But, before we get into the top three reviews, let’s take a look at the star rating of risingstars.js (2021 JavaScript Rising Stars)

For the first time ever in JavaScript Rising Stars, React is the number one UI framework, but when you consider the fact that Vue.js is split into two repositories (for versions two and three), it’s actually the leader.

The Svelte framework, which ranks third before Angular, made its own adjustments to the rating. More and more tools or components include Svelte as a target framework (e.g. Vite).

Here is what the top front-end frameworks look like: 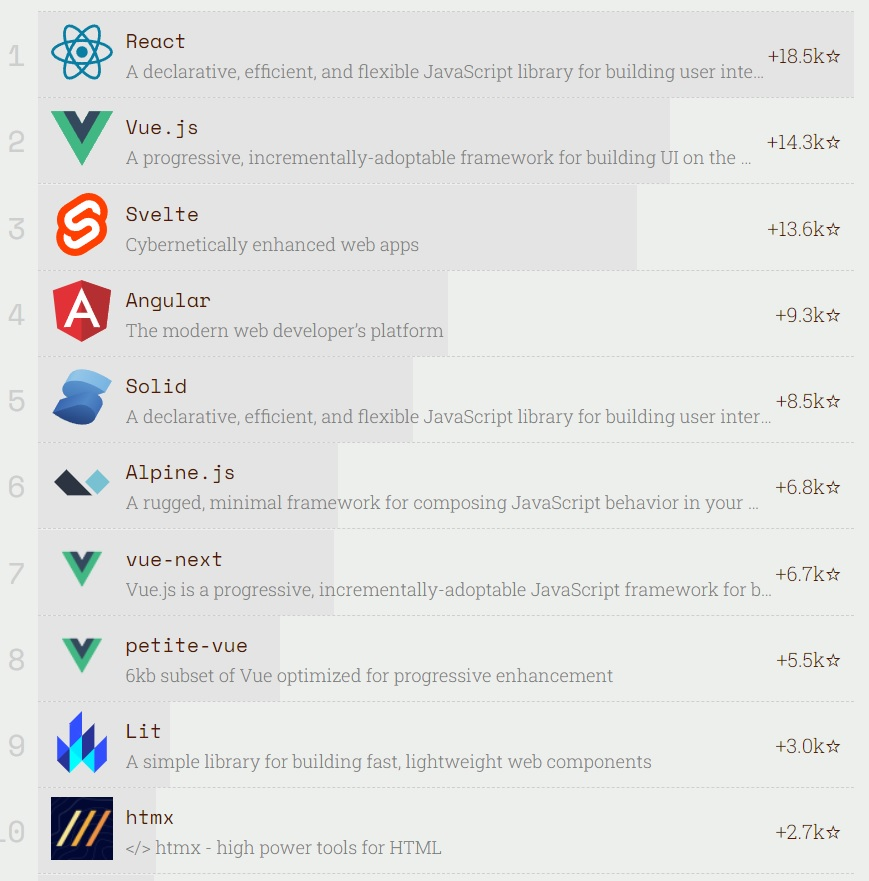 DISCLAIMER: The choice of a framework is a personal matter for everyone. We do not insist on the absolute universality of our three, they are simply the most common in our team 🙂

This framework has become especially popular in recent years. From “one of the hundreds” it went to a leading position and became a favourite in a professional environment. Today, Vue is considered one of the most suitable frameworks for asynchronous rendering on the server side.

Professional Vue.js for developers is a relatively recent framework designed to increase performance and accelerate loading. But these are not the only strengths distinguish Vue.js.

Evan Yu created Vue.js, working at Google as a creative technologist. Thus, in a sense, it is similar to the Google Angular JavaScript frame, for example, in the use of a virtual DOM plus Vuex to control status in the Redux style.

Vue.js allows you to create amazing web and mobile interfaces, as well as one-page applications much more easily than other frameworks. Since Vue is not only one of the most famous JS-frames with open source, it is also one of the largest libraries used to create various components of the site. The versatility and reliability of the frame has been repeatedly proved by large companies. As an example, the Netflix streaming website uses Vue.js on Facebook for marketing news tapes.

Nevertheless, it is designed to solve problems that exist with Angular and React. Of course, Vue.js has both pros and cons. It has an open source code and is supported by donations from sponsors and partners, including Vehikl, Modus Create, Rangle, Laravel, Storekit, Devexpress, and many others.

From the undeniable advantages, you can highlight:

*83,400 questions on StackOverflow by tag #vue.js and more than 187,800 stars on GitHub demonstrate the popularity of Vue.js.

React.js was created by the Facebook project team back in 2013. However, not only has it not become outdated and has not lost its popularity but, on the contrary, has become even more in demand due to its characteristics. The React.js library was created in order to separate the interface into parts and make the development of the final product easier and faster.

React.js introduces special JavaScript code, a preprocessor step that adds an XML-like syntax to JavaScript. This helps to assemble readable code, and save it into one checked file. Being able to discard HTML in the render function without string concatenation is excellent. Through the use of a specific JSX Transformer, the HTML is converted into functions.

React.js creates an efficient virtual DOM known as the Document Object Model or vDOM. This allows you to create a lightweight DOM tree and store it on the server side.

Programmers have no particular complaints about the React.js framework. For the most part, this is due to the fact that this environment is undergoing a stage of active development and improvement, which makes it stable and accurate in operation. A clear feature of the framework is that it is essentially a library. However, due to its wide functionality, the tool allows you to use it without using other services. React.js does not need to be integrated with other services. The front-end implementation of this tool demonstrates high efficiency.

Angular is an eternal competitor who will not be ignored

Angular is the most valuable framework in the technological arena, the most mature and proven. At the same time, it produces updates in accordance with the trends in the industry.

The first advantage is bilateral data binding. Thanks to this, the developers get the opportunity to create templates more quickly. Any changes made in the performance or layer of presentation are automatically and instantly displayed in the model. Simply put, Angular is built on the basis of MVC architecture (Model View Controller), which allows developers to make changes easily. In case of any changes made to the “model,” the “view” instantly changes.

Another advantage is manipulations with DOM – a software interface for HTML and XML, which helps developers determine the logical structure of documents as well as manipulate the document. The developers receive the simplicity of DOM management (object model of a document) thanks to a bilateral data link. Moreover, this is impossible with other JavaScript frameworks. Manipulations with DOM help developers save time because they just need to translate and update DOM elements.

Of the pluses, you can highlight:

The choice of framework is an essential task at the first step in development. The final choice of the framework depends on the project that needs to be implemented, so it is important that the team has experience working with each and can objectively evaluate the pros and cons of each, and select the most suitable project for specific purposes. The Itera Research team has specialists working with all the key frameworks because each project has its unique tasks. We will find an approach and a solution to any project.